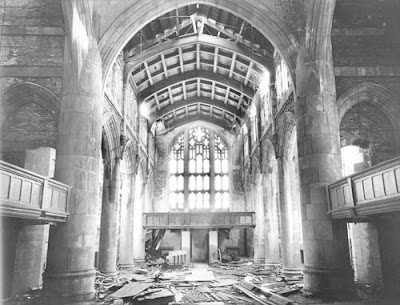 I somewhat lucked into my large format rig – my boss at the camera store had his Crown Graphic in the basement, and when the store closed about a year and a half ago, he basically gave it to me. I had only really puttered around with 4×5 once before, using my school’s Toyo view camera, to very… unspectacular (yes, we’ll go with that adjective) results. But so this huge, confusing machine was handed to me, with no instructions, or helpful tips (The Worst Co-worker In The World had to show me how to open the thing up, for heck’s sake – talk about embarrassing) so off I went. After a few false starts, some really terrible double exposure tragedies, and a lot of black frames, I started to find my way with this camera, and much happiness ensued.

This photo was taken inside the First Methodist Church in Gary, IN earlier this spring. Alex Lang and I were in the Chicago area for a conference, and having been here a number of times, I knew it had to be on the itinerary. Gary is something of an urban exploration mecca, with the church (site of a recent filming of the upcoming “Nightmare on Elm Street” movie), a bunch of burnt down/falling houses, an abandoned post office, and plenty of urban decay to keep semi-adventurous folks like me happily climbing around rubble and snapping pictures.

This was the first time I had taken the 4×5 into the church, and it was surprisingly easy to maneuver. A graphic camera lends itself to a portability other large format cameras do not, as it’s basically a fold-out bed where the lens rests, and a ground glass that flips open for focusing any lens other than the 135 it originally came with. The lens I used for this particular photograph was my trusty Fujinon 90mm SW, the f/8 model, which according to the internet, is the vastly inferior model and is not to be trusted with any even remotely important pictures. Having worked in a camera store for four years, I have heard about plenty of internet lens reviews, none of which have interfered with the taking, and in many cases, the sale, of many of my pictures. The only complaint I have about this lens would be when I forget to take the darkslide out of the film holder and end up missing a shot, in which case I will whine loudly to anyone around at the terrible aspects of this lens. What’s that they say about the poor craftsman?

This photo was shot on Fomapan 100, and printed on Kodak 11×14 fiber paper, the semi-matte stuff that doesn’t seem to yield any actual blacks. Still, not bad, right?