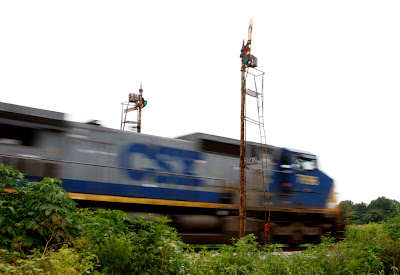 The Chicago, Indianapolis and Louisville RR, a/k/a The Monon (since Monon, IN is where the railroad’s two mainlines crossed each other) stretched from the top of Indiana to the bottom. Through countless ownership changes, two world wars, and even the storm that severed its now two halves in 1993, the Monon saw trains pass through its Indiana towns daily for the better part of a century. Recently, thanks in large part to the demise of our nation’s ability to actually make any of the things it uses, train traffic declined to levels not seen in decades. What this meant to lesser-used lines like the southern half of the Monon, was that it went from a decently-used secondary mainline to Louisville, to a one-train-a-day relic, on its last legs, waiting for a stroke of the pen to turn it into a bike trail.But, before we get all boo-hoo about things, let’s take a step back, because there are some important facts about this line that make it unique, and worthy of all this adjective-ridden praise. The main draw of the Monon, to anyone who is as nerdy about trains as I am, is that the signaling system on the line is upwards of ninety years old, utilizing mechanical semaphores instead of the regular old lights you see on most anyone else’s signals. This is actually the last line east of the Mississippi using these signals, so, yeah, kind of a big deal. The other, more widely appealing reason for this rail line being so much fun, is that there are two stretches of track that run directly through the middle of an active city street. Street running is rarer and rarer these days, for obvious reasons, but yet, the Monon happily disrupted two cities on a daily basis – Bedford (J Street, which forms the west side of its town square), and New Albany (Fifteenth Street, which was the greatest place to see near fatal train-on-car collisions, if that’s your kind of thing). Combine these two awesome railroad features with the beauty of rural (no, like, reallyrural) southern Indiana, some fast back roads, and the fact that the trains never went fast enough that you’d lose them on a chase, and the Monon was my favorite place to spend the day shooting trains in the whole state. Didn’t hurt that it starts only thirty miles south of Bloomington!

Now, obviously, the charms of this line were not lost on the rest of the world (…of people who care about trains) so, when it became apparent that CSX was going to shut down the Hoosier Subdivision (their name for the Monon’s southern end), the masses descended on Bedford, or Mitchell, or Orleans for the twice-weekly southbound movement of the Indiana Railroad, to chase it south. CSX had long since moved their mainline freight off the Hoosier Sub (more on that later), so the only trains taking this route were INRD’s, between Jasonville and Louisville. The glory of their trains, was that they’d run like clockwork, so if you showed up in Mitchell at 9AM on a Tuesday, you’d know you were going to see a train. This level of certainty is rare when it comes to finding a train, and it also meant you were chasing the train on some days with fifteen of your closest brand-new slow-driving out-of-town friends. Not always perfect, since railfans are some of the most socially…interesting folks in the entire world, but hey, meeting new people is what life is all about, right?Well, CSX shut down the Monon in June. They moved the remaining traffic to another equally beat up stretch of track, the Louisville & Indiana Railroad, with the difference being that those tracks belonged to, indeed, the L&I, and not CSX. A chapter of railroading was now finished. People online boasted to any who would listen that they had shot the last movement, ever, on the Monon, that they’d seen history written, right in front of them, that nothing would ever grace the jointed rail of this historic section of track, and so on. Hyperbole is big on the internet, for sure, and train people are some of the best in the business. Of hyperbole. Which does not pay a penny. But I digress.

Fast forward to mid-July, 2009. CSX was doing trackwork on their mainline south from Vincennes to Evansville and into Kentucky, and had to re-route trains onto another rarely-used mainline, the former B&O between Vincennes and Seymour. The internet buzz was not nearly what it was over the Monon, because they do actually still run trains on the line, albeit very occasionally. Well, let’s face it, I’ll take any opportunity I can to hang out in southern Indiana and shoot trains, and for some detoured trains on a bit of track that rarely sees anything of any interest, hey, I’m all over it. The normal route is St. Louis to Vincennes (where they’d normally turn south onto the line being worked on), and then onto Louisville, but the detour took the L&I from Seymour. So, Vincennes to Seymour was the target. Thanks to some guy-who-knows-a-guy-who-works-for-CSX connections, a close friend of mine was able to get me a rough schedule for when I could expect the detoured train, so away we went for US 50.We caught the train just east of Shoals (where a lot of the midwest’s gypsum comes from, bet you didn’t know that!) and banged off a few shots between there and Mitchell (including a spot called Georgia, which seems awfully funny to me) where, much to everyone’s surprise, the train stopped. Seemed odd, wasn’t the plan to go to Seymour and head south there? Well, not so fast, there, chief! As it turned out, the fellas who assembled this particular train in St. Louis were unaware that the L&I was unwilling to handle another railroad’s hazardous material shipments without prior approval, approval CSX never got since they didn’t realize the train had hazmats on it until somewhere around Washington, IN! So, instead of following the detour route of every other train that week, this ONE train, the one that I was chasing, was to head south on the Hoosier Sub to Louisville. The crew was to arrive sometime around 3PM, reassemble its now-cut apart and tied down train, and start down from Mitchell at 4PM. It was taking the railroad a while to find a crew qualified to run on a line that, until a few hours earlier, was out of service, and this accounted for the delay. Delayed as things were, such good fortune is not to be squandered with impatience, so I sat in the parking lot of the Michell depot, read a book, and waited out the afternoon.

And so with all the other train shooters somewhere else, all the internet railroad geeks talking about something else, CSX ran its last through freight down the Monon. No fanfare. No caravan of rabid photographers talking about the epic event that they alone were documenting. Just me, my Pathfinder, and a train, under the same cloudy skies that had accompanied me on how many of these chases over the years. I shot the train at my favorite spots – Orleans, Leipsic (remember what I said about rural? Yeah.), Campbellsburg – all the best places to shoot the blades. As evening descended, and descend it did with all the cloudcover, I got to Smedley, IN, a “town” that consists of two farm supply stores and a church, and incidentally, a place I had never, even once, shot a train. I’d always driven past it, in order to get to the next spot down the tracks, but with the train moving at a turtle-like 10m.p.h., time was definitely on my side.I set up behind the feed store, well ahead of the train, and waited. Waiting is integral to chasing trains, so that was nothing. I must have been playing Brickbreaker or something, when a car rolled up, and parked next to mine, to which I naturally thought, “Oh, someone else must have heard this train was running and didn’t get ahead of it until this far south.” Fair enough, sure. Well, no, it was weirder than that – here came two rather dainty gentlemen, meandering across the same cornfield I was standing in, to “just stop and have a look” at the blades I was going to shoot when the train arrived. I nicely explained that, hey, this was probably the VERY LAST TRAIN that would run on this line for a very, very long time, and that I’d been chasing it for forty miles at this point. Maybe they’d like to chase it the rest of the way, given the importance of what was going on, I’d be glad to lead the way. No, the guy with the moustache said, they were just passing through and thought it might be neat to see a semaphore. “Neat.” Here I was, listening to the death rattles of a railroad lovingly nicknamed “The Hoosier Line,” and these two cats just happened upon a detoured freight, detoured again at the last minute down what amounted to an abandoned mainline – there aren’t words to describe that kind of luck. I should have asked them which lottery numbers to play that night. But so the train showed up, at long last, and I decided to do a bit of a shutter drag, give the impression that this train was speeding its way south, to a future with the promise of more trains on my favorite train tracks anywhere. 1/6th of a second at f/22 makes even the slowest of trains look like a Japanese bullet train, I think I definitely got the point across. I wished my two new friends safe travels, and sped off down 60 to Hitchcock, for my last shot of the day.

Hitchcock is down (not surprisingly) Hitchcock Rd., and is one of many railroad location names with no relation to any actual town. It’s at the top of the steepest grade on the line, well off the highway, on a dead-end farm road, so it’s as quiet as a tomb until the train shows up. Talk about the perfect place to bid adieu to the Monon. I stood around at the crossing, pretending that I wanted to take something of a different shot than I usually took, but really, I was just getting antsy. I wanted the train to come, but in actuality I didn’t, because that would be it. No more lazy chases on a spring day, no more semaphores making their metal-on-metal 90 degree dance moves after the train passed, no more pedestrians playing chicken with a southbound on 15th Street. Once these rails went silent after this approaching train, they’d be silent, at least to me, probably forever. As I heard the inevitable rumble of this train heading upgrade towards me, it was, honestly, pretty sad stuff. I’m not one to be too romantic about, among other things, trains, that whole the-world-isn’t-what-it-used-to-be noise is definitely not for me, but it would be a lie to say that I wasn’t affected. I took my pictures when the train arrived, and stood there until well after the train was gone, after the rails stopped announcing their purpose with the squeaks and clicks of their departed, temporary visitor, until all that was left was me, at a railroad crossing in the middle of nowhere, knowing I’d just said goodbye to something very real.