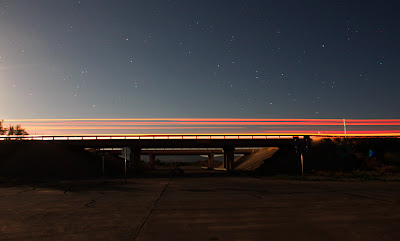 My brother and I drove eight thousand miles last July. He was originally slated to go out west with a friend of his. This friend seemingly thought that telling his employer of his plans to drive cross-country didn’t need to happen until three days before the proposed start date, so after he was inevitably laughed at, and told where to stick his plans for leaving in 72 hours, I became the man for the job. Not that I minded, I’m always game for a drive.Our first stop was Austin, since the UT Art Museum (I honestly have no idea what it’s called. Whatever, it was 110 degrees and there was no place to park.) had an exhibit of Jack Kerouac stuff, and what’s better on someone’s first big cross-country trip than some inspiration from Mr. On the Road himself? Of course, little did I know, the actual manuscript for the book was not in Austin, but a mere fifty miles from our starting point, in Indianapolis. Oops!

In case you’ve never been there, Texas is effing huge. To help you understand the sheer hugeness of the place, here’s an exercise in imagination – take the biggest state you’ve ever driven across, multiply it by three or four, remove any of the defining/interesting/compelling features about that state, flatten it out, tack up some vaguely offensive anti-immigration billboards, and give it a massive 80mph daytime speed limit on I-10. You’re now in Texas, my friend.The above photo was taken sometime in the middle of the night, on a more-desolate-than-most (we even saw a scary hitchhiker, followed shortly thereafter by cops searching the countryside with spotlights!) stretch of 10. We saw a train (how often do my stories start out with that?), since trains are plentiful and also very obvious in the middle of the desert at night, so of course trying to take a picture of it in the dark seemed like a good idea. We got ahead of it, pulled off on one of the many “Ranch Access” exits, discovered that we were about a half mile from the tracks without any road whatsoever leading to them, and made other plans. Namely, we both found bushes to pee behind while the train went by, barely visible from where we were standing, just a slight rumble in the dark.

Now, not being one to give up an opportunity to stand around in the middle of nowhere with my camera and not take a picture, I set up my tripod to get some time exposures of the highway, since how often does one find themselves in the middle of Texas, on a dead-end exit ramp, under the stars? This is a tractor trailer making the streaks, and the exposure is around thirty seconds, I think. Pretty wide aperture to get some stars in the shot. Then we got back in the car and drove to White Sands.