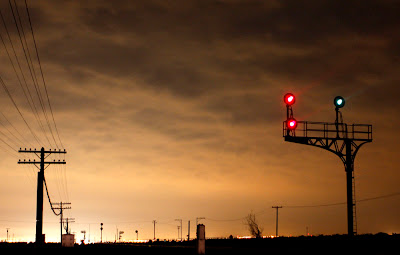 When we got to Sandcut, it was late, close to midnight. I wanted to get some shots of this iconic SP signal bridge at night, so we set off after a late dinner at the truck stop in Tehachapi, where the topic of conversation among the local knights of the road was, and I kid you not here, immigrant Canadian truckers, and their penchant for relieving themselves while they drive. You just cannot make that sort of thing up.

So off we went, west on 58 towards Bakersfield. Finding Sandcut in the daytime is easy enough, just look for the signal bridge as you drive down the road along the tracks. At night, though, I can’t tell you how many times I have driven right by it. The above photo may make it seem like there was plenty of light (long exposures do that, after all), but out there among the orange groves and back roads, it is really dark – the kind of darkness that feels like it’s hanging right in front of your face the entire time, close enough to touch. That’s the kind of night this was; flashlights and stumbling over rocks while carrying a tripod and camera bag to the spot.

The cool thing about this part of the line, is that at night, it is eerily quiet. You’re far enough away from the highway so that the trucks don’t make any noise, there’s not all the wind you have up on the top of the hill, and aside from the occasional farmer driving by, it’s just you, some train tracks, and the steady breeze through the orange trees on one side of the road, and the onion fields on the other. You know how sometimes when you stand really still, it sounds like the place you’re standing is speaking only to you? Sandcut at night gives me that feeling.

Of course, that gets flipped on its head the moment you hear a train on the radio. The detector at 328 goes off, and you know it’s a matter of minutes before the signals light up and the train is on you, having just a few miles ago negotiated some of the steepest grades on the west coast. Now that the train is done with that, it’s 60mph running all the way to Bakersfield. In the middle of the night, in the thick, black darkness of a dusty place the rest of the world would think nothing of, as that train blasts by, all lights and wind, it’s the greatest feeling in the world.