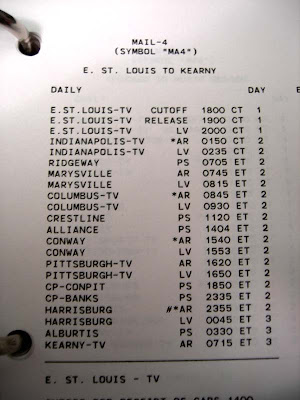 My parents got divorced a few years ago, and when married people own a house, and then they get divorced, that house has to get sold. Part of selling a house with two grown kids’ worth of stuff in it means lots, and lots, of cleaning, throwing out, packing, and boxing up. Every time my mom comes out to visit from PA, she brings a new pile for me to try to find a place for in my tiny house. In 2006, she brought me a rather sizable stack of books, and a huge mess of train stuff from when I was much younger than I am now.

Among the pile of books were two binders, one of which had my once-coveted list of Conrail freight schedules. This means nothing to most people, so I will explain, briefly. Conrail was the railroad I grew up with, the railroad that went through most towns on the east coast, up to 1999, when it was bought by Norfolk Southern. Well, at least the part that I care about, was bought by Norfolk Southern. Whatever. Most of my earlier memories of trains involve this railroad. So, every six months, Conrail would publish, for all of its railroad employees, a paper list of every single train they ran, complete with times through every pertinent town along the way, so the train crew knew when to be where to drop off or pick up cars, and things like that. Something of a simplified explanation, but I’m the one writing this, so tough nuts.

About 20 miles from Bethlehem, there is a town called Alburtis, which is well west of most of the development and sprawl that I dislike about the Lehigh Valley. Just a small, asleep-by-ten-PM, western end of the Valley kind of place. It is also perfect for sitting and watching trains in the middle of the night. Back when I was a teenager, Alex and I (along with any number of other dudes who seemed interested at first, but quickly found that waiting for hours in the middle of the night for a train sounds far more awesome than it really is) would sit along the tracks for hours upon hours. We didn’t have all that many friends, we didn’t sleep, ever, and especially in the summer (but as we got older, the winter, too) we’d be out insanely late, just sitting along the tracks in lawn chairs, talking, drinking Turkey Hill iced tea (which is about as central PA as it gets. It also isn’t really very good) and watching peoples’ TVs flicker on their walls as they slept.

Being complete nerds about trains, we always knew what was coming, and when, and relied heavily on listening in on railroad radio frequencies on the trusty Radio Shack 10-channel Realistic scanner, to know what was happening on the line we were sitting next to, but also on our freight schedules. Despite the fact that only railroad employees were issued these things, somehow we always ended up with stuff like freight schedules, roster information, lots of Operation Lifesaver “Stay off train tracks, you’ll die!” propaganda, etc. Most often played was the “we’re just young dorky kids who are studying about trains for a project at school” card (worked every time, by the way) and in turn, we got tons of free, informative pieces of railroad stuff.

In England, people who like trains are called “trainspotters”, and with good reason- the entire (well, not entire, but large) reason to watch trains in the UK is to see every single locomotive on the British Railways system, which in a country that small, isn’t entirely out of the realm of possibility. Trainspotters have their book, and when they spot a locomotive they haven’t seen, they check it off the list. Most people who like trains here are the same way, namely, the engines are the most important thing, and everything else be damned. i was never really like this, at all, as discussed previously in this here blog. As I’m am sure you’ve picked up by now, most of the reason I like trains, or anything really, is because of the details. The history, the context, the effect on other people, the sound it makes, everything. So, to bring it back to what I am (ramblingly) talking about, not just what engine is pulling some train. My favorite part of watching trains in the middle of the night growing up was that at night, all the really important trains ran. Trailers, containers, UPS trucks, the mail. Stuff like that. Trains, that only days earlier were in California or Oregon or some other port on the west coast, that by the time they were passing me were only hours from the other side of the continent from where they started. The daytime was for locals and manifests, trains anyone could see, but the wee hours of the morning were for the important stuff.

Being a link in that chain, no matter how small, always really struck me. A lawn chair in the gravel along some train tracks at three AM doesn’t mean much in the grand scheme of things, but knowing what you’re watching as it goes by, knowing where it’s going and where it’s been, always really did something for me. Still does. So, instead of trainspotting for locomotives, Alex and i saw our prey somewhat differently – it was all about the actual train. Knowing that if we stayed up until sometime after four am, we would see MAIL 4 – a fast, long, loud-as-hell train, pulled by four or five smaller, four-axled engines, as opposed to fewer large, six-axle models (smaller locomotives were better for acceleration, which on a train like this meant less time wasted accelerating back to track speed after a setoff or red signal), a train that ran through Alburtis so fast it seemed like it was on fire – that was a huge catch for us. Definitely, this was an accomplishment, a feather in the hat of personal feats. You knew you had stayed up long enough to beat the railroad at its own game, somehow. You had seen a train that, by going past at a particularly insanely late/early time of day, you somehow weren’t supposed to get to see. Talk about a good night.

So then, going through this pile of old books, i found my old Conrail freight schedules, in the binder I carried around in my backpack like it was a bible. Now, not that freight trains have ever run “on schedule,” even remotely, but knowing the general timeframe of how a railroad worked, when they ran what train; that was vital information for me as a kid. I had it memorized in no time, could tell you (and by “you,” I mean every bored teacher, relative, friend or parent. Oh, my poor parents. The patience of saints, those people.) when ALPI left Allentown for Pittsburgh, or when TV-61H made its way out of Bethlehem, and tell you, if you were still listening, where you could take me to see these trains pass.

But so it all came back to me as i went through the pages: the summer nights spent listening to crickets, hearing a train blow its horn ten miles away as only an echo, knowing that in a matter of minutes, it would be thundering through whatever small town we were in that night – Alburtis, Bowers, Lyons, wherever. Any of these Reading Line towns where we knew we were the only people awake, the only people watching this happen. It was as if it was all happening just for us, all the noise of the passing train, and then nothing. Back to the quiet that hung like fog in the summer heat. Even in the middle of the night it was still hot, it smelled like corn and a distant dairy farm. You could hear the streetlights hum.

One Reply to “At night.”