In September, I shot the wedding of my good friend Dave Honan and his beautiful bride Cortney. Since this wedding was just outside Seattle, and since this is my website you’re looking at, it should come as no surprise at all that the decision to drive out there for it was both the easiest and least surprising choice I’ve made in a while. My companion on this trip was the versatile and similarly self-employed Laura, whose stuffed animal business took a back seat to the duties of DeLorme navigator, food choice maker, and assistant wedding photographer.

Among the many things we did on the way there was a trip through some of my favorite terrain on the continent- the area west of Salt Lake City along the former Western Pacific and Southern Pacific lines that eventually meet in Wells, NV to head west through Palisade Canyon. Our mission was pretty specific this time, which stands in stark contrast to my normal western trips that are dictated by a complex math equation involving how many places I can get to if I deprive myself of enough sleep for the three days needed to make it back home before some very pressing engagement. Well, this time I left a full eleven days between departure and the wedding I had to shoot, and this left plenty of time for the foolhardy, but oh so awesome endeavor I’m about to explain.

2012 is Union Pacific’s 150th anniversary. UP, like most modern Class 1s, is extremely conscious of its image to the public, and to that end they maintain a stable of pristine vintage locomotives and passenger cars. This equipment tours the system to celebrate big events, important railroad functions, and sometimes I think they just take it out for fun, because if I ran a railroad, I know that’s what I’d do. Among this sparkling museum-like collection of railroad history is their lone steam engine, 844. It spent most of 2012 going from place to place to help celebrate the railroad’s sesquicentennial, and in late September it departed its homebase of Cheyenne, Wyo for an eventual terminus of Sacramento, CA. This meant we’d be in the same general part of the country as 844, and a plan was born.

West of SLC, but not yet to the lovely oases of Wendover or West Wendover (two distinctly different places, which if you’ve been there, you understand why) is a massive expanse of salt, craggy mountains, and, if you go far enough north from Interstate 80, the western shore of the Great Salt Lake. From a sightseeing perspective, I don’t think there’s much draw, but from a train nerd perspective, there’s a massive reason to brave the nearly thirty mile-long gravel road that winds its way from the off-ramp: SP’s Lucin Cutoff.

Because I’d hate for you to have to leave this page to google what the Lucin Cutoff is, I’ll explain it in a few long sentences: The original transcontinental railroad went from Omaha to the west coast, and its most treacherous, most all-around-pain-in-the-ass, slowest stretch of track happened to be just north of the Great Salt Lake, near Promontory. Remember reading about the Golden Spike in grade school? Well, this is the neck of the woods where that happened. In 1905, the Southern Pacific  said “hey, this whole bottleneck north of the lake seems like a real mess, what if we just built a bridge OVER it and then reaped the monetary benefits of shippers using our new, easy way through Utah?” (paraphrased quote, may not be factually accurate) and built a massive, twenty mile-long wooden bridge over the Great Salt Lake, that also nearly bankrupted the railroad. Seriously, think about that: it was 1905, in the middle of a state completely devoid of trees, and they built a gigantic timber bridge over a lake. Awesome. The bridge continued to serve the railroad well into the 1950s, when they began constructing an earthen fill to replace the aging structure. Not quite as cool, but still, this was something I had to see.

844 was slated to depart Ogden on September 22nd, so the idea was to get up to Lakeside and survey the shooting opportunities the afternoon before, and then camp out that night. Here’s the thing about the drive to Lakeside- it’s LONG, and pretty spooky in its overall desolation. The many signs warning you of unexploded ordnance, military exercises in progress, and to “drive at your own risk!” would be enough to scare off most people, but we were on a mission involving trains, so throwing caution (or common sense, whatever) to the wind was imperative.

The roads weren’t bad, for the most part: pea-sized gravel, nicely maintained, it all felt sort of like a really easy rally stage on an old Colin McRae game. That is, until we came to the end of the military installation and passed into Huge Potholetown, Utah, adjacent to Upper Rocky Switchback City. Mind you, I was in my Subaru WRX, a fine vehicle for many things, but getting up a gigantic rocky hill? White knuckles, copious swearing, and a fair amount of luck got us to our vantage point for the next 18 or so hours:

Here’s the thing about camping a few hundred feet above a lake to the east and a massive dry lakebed to the west: you’re going to have a lot of warning of oncoming trains. I was getting scanner reception for thirty miles in both directions, and were it not for the smoke in the sky from the late-summer forest fires out west, I would have seen trains from just as far away. This was the first time I’d ever experienced anything quite like this, and the fact that we were pretty much the only two people for dozens of miles was a weird feeling. The wind was fierce, especially once the sun had gone down, but considering we were on the highest point in the middle of a flat expanse of land, this was not surprising. The coyotes calling from hilltop to hilltop all night was a bit unnerving, I’m sure they were as interested in us as we were of the passing trains. And the trains were plentiful! From the moment we got there, UP had them running like streetcars all night, to the point that getting out of the car to shoot them all got a bit tedious. Eventually, a fitful sleep came over me after a few hours of some of the most fun night shooting I’ve ever done. Moonlight, stars, and trains twenty miles away- there aren’t a lot of places where you’re going to see that!

The video cannot be shown at the moment. Please try again later.

Morning arrived, eventually, with the sun shrouded by clouds. This wasn’t a massive deal for me since the shot I was going to get of 844 was directly into the morning sun. The freight trains dried up in preparation for this special move, so we were left with some time to make tea and eat a fantastic car trunk breakfast of Triscuits and avocados, which sounds horrid but was really quite good and would keep us full for most of the morning.

…and in a little more than a half an hour, a VERY short train with curious little puffs of smoke following it, slowly crossed the lake in front of us. I’m not sure what I was expecting, but this train was completely dwarfed by the lake, even at 300mm it was hilariously small, as you can see:

As per their plans, the train parked itself at Lakeside siding for a half an hour to do routine maintenance. This worked out wonderfully for my purposes, because that happened to be directly below our perch, so many pictures were leisurely snapped while the tool car guys did their thing: 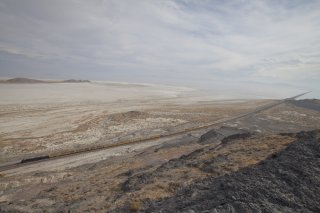 The sound of the idling steam (do steam locomotives idle? I’m a bad railfan for not knowing the proper term) and intermittent whistle blasts reverberated off the walls of the hills and mountains that surrounded the lake’s shore, and the whole area was awash in the glory that is UP 844. Seemingly just as quickly as the train had arrived, though, it was gone, its drivers thundering across the lake’s salt-crusted evaporation ponds, and eventually out of sight. What an experience!